After the first practice run of ‘Dining with Des’ the previous day, for Sunday’s entertainment, Steve was leading us on a walk through London of every stop on the monopoly board.

I met up with Steve and Bev in their Travelodge hotel (in different rooms, there’s no gossip here), mainly because that meant I could leave my bag with them and save me from traipsing it about all day. Bev is forcing a smile for the photo even though she had no phone signal, she had exhausted the Travelodge’s free thirty minutes and she had discovered the local phone mast had fallen down or something.

Bev sent Steve to see if he could see the broken phone mast that was reported on the O2 web-site. She would have had a tea to calm her nerves, but the Travelodge team hadn’t topped the tea bags up in the room. There were some tensions in the air of the Travelodge reception that morning I can tell you…..

And then we were off, Bev still completely livid that she couldn’t update her TikTok, Instagram and Twitter accounts. Steve and I remained calm. Bev started to Google the details of the managing director of O2 and then realised she couldn’t access Google.

The start of the walk has been set by someone walking this in the past at Lambeth North underground station, which is where it has been suggested the Go square would be. I think it’s more likely that Lambeth North is the least visited underground station in Zone 1 and it needs all the help that it can get. Joining Susanna, Steve, Bev and I for the day was Thim. He heard about Bev’s phone situation straight away.

It’s fair to say that the creators of the Monopoly board botched arrangements for people who wanted to walk to every destination nearly a century on. There is just one street that is south of the river, so we came all this way just to take a photo of the Old Kent Road sign. And then we walked back.

Fair play to someone creating a little bar out of some former public toilets, but this is becoming too common across London, with a lack of public toilet provision. Thank goodness for Pret and JD Wetherspoons…..

Walking on Tower Bridge, crossing back over the Thames. Bev found a little corner where she got 4G and she downloaded all of her messages. All one of them after all of that faffing about. I didn’t say anything.

After spending hours getting the underground to Lambeth North and then going to Old Kent Road, we ended up near to where we started on Whitechapel Road.

Walking by St. Paul’s Cathedral. This took quite some time, as Bev seemed to be taking photos of every individual building in London. We had no idea what she’s going to do with all of these photos, but we didn’t say anything.

Fleet Street, until recently the home to the British newspaper industry. Once this whole street would have looked very different, with journalists and print workers coming in and out of the pubs, along with the noise of the printing presses and the smell of ink. Times have changed and production is now very different, but there must have been something very addictive about this street when it was once where the vast majority of national news reporting took place.

Strand, which in the medieval period had a series of grand houses reaching down to the River Thames. These have mostly long gone, although Somerset House still stands and the Savoy hotel is a reminder of the now demolished Savoy Palace.

Bow Street, the home of the Bow Street Runners which operated between 1749 and 1839.

By chance, we stopped outside Zizzi’s so that Susanna could have a look at the menu and see if she fancied making a booking.

Leicester Square, once a peaceful residential square and now an entertainment centre with numerous opportunities to take money from parents whose children might be excited by the bright lights of M&Ms World.

Coventry Street, named after Henry Coventry who was a politician in the late seventeenth century.

Trafalgar Square, where I did take a photo of the sign, but I forgot to upload it and it feels an excessive obsession to go back and add it now. I would add here that Steve took more care and attention with his photographing the street signs, whereas I was listening to Bev’s phone woes which distracted me.

I’m not sure that any of us thought that we’d get such good weather in late February, but the sky remained blue all day.

There was a large-scale demonstration taking place in Trafalgar Square about the situation in Ukraine and I heard the cheers when the name of Volodymyr Zelenskyy was mentioned. He’s certainly becoming something of a hero around the world for his courage.

I spotted numerous Polish flags around the square, and I know they will support the Ukrainians in every way that they can.

Northumberland Avenue didn’t exist until the late nineteenth century when Northumberland House was torn down to allow for a new thoroughfare which could have large hotels built on it.

Whitehall, which is where some of the biggest parties of recent years have been held.

Pall Mall, where I decided to take the photo around one metre away from the sign to save zooming in on it. Anyway, it’s named after the game pall mall, which is vaguely similar to croquet.

Piccadilly, once known as the road to Reading, but its current name is likely from a wealthy merchant who made and sold piccadills, a piece of lace that was worn around the neck.

Vine Street, which is one of the oddest locations on the Monopoly board as it’s just a short street, it’s thought added as it had one of the largest police stations in the country and therefore notable. It seems that the three orange squares were given a law theme, with the Bow Street Runners, the Vine Street police and the Marlborough Street courts.

Great Marlborough Street, confusingly referred to just as Marlborough Street in the game, which caused us to do some checking that we were in the right place. It’s now perhaps best known for being where the department store Liberty is located, but there’s little left of the properties that were here when the street was first created in 1704.

Oxford Street, which is now apparently the busiest shopping street in Europe and it is certainly one of the most annoying for people walking slowly and faffing about. It’s now mostly home to American sweet shops, a new trend that I can’t explain as there are around 15 of them and few of them actually had any customers in.

Park Lane, this is more Gordon’s sort of territory, so we had a quick gossip about him when we reached here. The street was once home to Benjamin Disraeli and the Dorchester Hotel is now located here.

The remains of the Marble Arch Mound, which I must admit that I didn’t dislike as much as nearly every Londoner did. Thim didn’t seem much of a fan of it either, I think I was just excited I got to climb a hill in London for free.

There’s no street called Mayfair as it’s a district of London, so this had to do.

Here are Bev and Thim after the former knocked over her tea. She was too busy checking the likes on her TikTok channel to help with the clean-up operation, with Susanna trying to deal with the three litres of liquid that Bev had knocked over, whilst Steve lamented that his lovely little notebook was now tea-stained. Steve tried to make the best of it and commented that some notebooks felt more authentic with some staining on them, but Bev didn’t hear that as she was seeing how many likes she had on her latest Facebook post.

Marylebone station and we did visit all four stations on the board, I just haven’t put every photo up. Not the more professional effort perhaps, but Steve is suggesting that he might write a blog post, so there will be better photos there.

Euston Road, the home of the British Library, where I have a card which is likely out of date as I haven’t been for years. That’s something else I must update this year.

This isn’t a photo of McDonald’s (well it is, but that wasn’t the point), this is Pentonville Road.

We popped into Pizza Union for a slightly crispy, but still delicious, pizza along with some olives and beer. Bev muttered about her knife and fork, but she had phone signal and so managed well given everything.

Here is the happy group, with Bev now beaming because she had 4G. We all felt a bit less on edge with that news.

There was no prison that we could quickly walk to (we thought about going to Pentonville, but it seemed a bit much), so we decided that the ‘Go to Jail’ square was best represented by this. Thim did find a free parking for two minutes sign, which sums London up entirely, but was very handy for completing the free parking square.

A slightly blurry photo, but this is the underground journey from Angel back to our various accommodations. The entire walk had come in at around 16 miles, which is a very walkable distance and we certainly saw a fair chunk of London’s centre. The first part of the walk cut through some areas that I haven’t visited before, but this is an interesting and creative way for people to see different parts of the capital. We were very fortunate that Steve thought to organise this and relieved that Bev got her phone signal. And it was lovely to meet Thim who didn’t annoy me, so that’s a marvellous plus.

I said earlier on that we didn’t find a prison, although my room in the basement of YHA Earl’s Court was quite near to it. But it was just over £20 per night for the entire room, so I couldn’t overly complain, but I’d say that the cleanliness standards at this hostel are far from ideal.

And with that, the day was over. I’m not sure what Bev was doing, but I suspect she was staying up late with her social media now that her phone was working again. 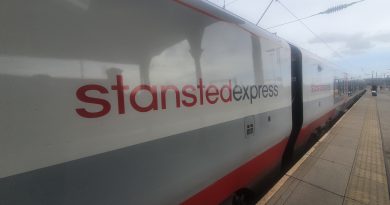