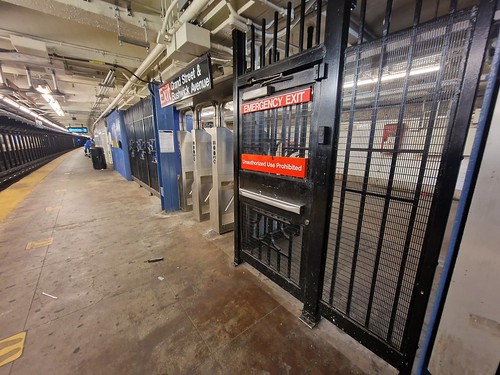 These emergency exit doors on Subway stations struck me as odd as they’re effectively a free pass through the ticket barriers. I was travelling a couple of stops between two bars (of the drinking kind) and a number of people just walked into the  station without paying (in New York, there’s no payment system to exit and travellers can legitimately just walk out) in what strikes me as a design flaw. An alarm does sound, but it’s mostly entirely ignored by station staff.

It seems that Janno Lieber, who runs the Metropolitan Transportation Authority, agrees:

“A lot of the riders who want to play by the rules are feeling like they’re suckers because they’re paying the fare and they see people sail right past them through the emergency gates.”

That same article notes that $500 million is lost per year to fare evasion across the city’s transport network, a quite ridiculous sum.